FARMINGTON, NEW YORK  – Leonard’s Express – a leading transportation services provider offering refrigerated trucking, dry van, warehousing and freight brokerage services – has won the 47th Annual Truckload Carriers Association (TCA) Fleet Safety Award for fleets that travel between 50 and 100 million miles. This is the second largest category in the competition based on mileage. Leonard’s Express beat out fleets from across North America for their dedication to keeping people safe on the road. 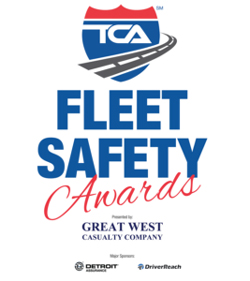 Each year the TCA hosts its Fleet Safety Award competition designed to recognize 18 fleets for their commitment to safety. The competition is broken down into six mileage-based divisions with a first, second, and third prizes awarded in each division. The winners are selected based on the carrier’s accident-to-mileage ratio, a metric used to show how many on-road accidents a fleet has in a calendar year.

“These annual awards identify truckload carriers that have demonstrated an unparalleled commitment to safety through presenting the lowest accident frequency ratios per million miles in each division,” explained the TCA in a December 2022 statement.

“Across the company, we work tirelessly to build a ‘safety first’ culture,” said Ken Johnson, CEO of Leonard’s Express. “Through training and the use of technology, we emphasize that safety is always our number one priority. Driving safely is not a task that can be given as a directive. Everyone has to believe it’s the right thing to do, even if it’s not the easy thing to do.”

To select winners, the TCA analyzed each fleet’s safety data, including an audit and verification of mileage-to-accident ratios. An independent auditor then validated all the information. The process requires each applicant to diligently record and track their fleet’s safety over the course of a year, no small task for a fleet that travels 50-100 million miles. 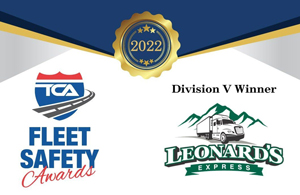 “Our Risk Control team conducts multiple, quarterly safety meetings at each of our terminals (Idaho, Wisconsin, New York, Delaware, and North Carolina) in addition to sending out weekly safety messages, which include the previous week’s hours of service (HOS) violations and incidents,” said Katie Griffin, Director of Fleet Safety for Leonard’s Express. “Leonard’s is a family, and we truly care about each other and want what is best for everyone. Our goal is to make sure everyone – our drivers and the motorists who we share the roads with – make it home safely.”

The TCA recognition is the second major fleet safety award that Leonard’s won in 2022. Last April, Leonard’s earned the Trucking Association of New York’s (TANY) Fleet Safety Award Grand Trophy for demonstrating an unparalleled commitment to safe operation in New York State. In order to qualify for the award, the judging committee must determine that a fleet has an exemplary safety record and a proven culture of safety.

The Significance of DOT Compliance

An overview of the auto transport industry

An overview of the auto transport industry

The Significance of DOT Compliance